Biodiversity is all of Earth's life, or the tremendous variety of life on Earth.  It has three essential components: 1) all of the species on the planet, 2) the genetic diversity within the individuals of each species, and 3) the habitats and ecosystems in which species live.
1) Species.  From the thousands of species in our oceans, to soil microbes, land plants, fungi, animals, and more, one component of biodiversity is all of the species on the planet.  You will have undoubtedly noticed a picture of a child in the slide show.  As a biological species that evolved on Earth, humans (Homo sapiens) are a part of biodiversity.  We are just one of the approximately 1.8 million described, or known species.  Estimates of the total number of species (the described species plus the undescribed, or unknown species) range from several million to tens of millions. Even if the conservative estimates are true, currently we have a name for only about 1/2 of all species.  If the higher estimates are true, then we have a name for even less, perhaps only 1/4, 1/6, 1/8, or (?) of all species on Earth. 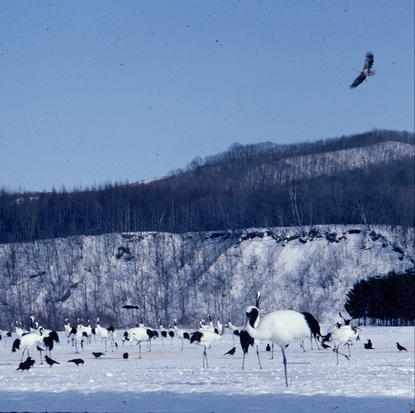 
"The whole is more than the sum of its parts".   - Aristotle

3) Habitats and Ecosystems.  Aristotle's well-used phrase is applicable to many things, including natural habitats and ecosystems, arguably the most important part of biodiversity.  It is well-known that species do not live in isolation in nature. Groups of species live in communities, and communities of species interact with abiotic (non-living) aspects of our environment (such as climate and soils) to form habitats and ecosystems.  We advocate for more protection of biodiversity at the habitat/ecosystem level both locally and globally.  And we encourage you to create a biodiversity garden on your property today.  What are you waiting for?
More on Biodiversity
"Because scientists have yet to put names on most kinds of organisms, and because they entertain only a vague idea of how ecosystems work, it is reckless to suppose that biodiversity can be diminished indefinitely without threatening humanity itself."  - Edward O. Wilson

The term "biodiversity" was introduced to the English language by Edward O. Wilson in 1988 when he edited the book Biodiversity, the proceedings of the first US conference on the subject.  To learn more about biodiversity from Wilson himself, start with the E. O. Wilson Biodiversity Foundation

Biodiversity arose on Earth through the process of evolution.  To learn more about biodiversity and the scientific theory of evolution check out the excellent website Understanding Evolution

Systematics is the science of biodiversity.  Systematists worldwide are working on understanding biodiversity by elucidating the evolutionary relationships between species, and groups of species.  To learn more, see the extraordinary Tree of Life Web Project

​Moths of an Andean Cloud Forest

by Nina M. Zitani, 14 February 2013: Photos: 2010-2012, Yanayacu Biological Station & Center for Creative Studies, Ecuador
One moth mimics a bumble bee, another mimics a leaf.  In the slide show I share some of my personal observations of tropical biodiversity, and attempt to qualitatively portray one aspect of biodiversity -- species richness, or the total number of species in a given area.  Tropical forests have the greatest species richness of all ecosystems on Earth.  For example, one hectare of tropical forest supports many more species of fungi, bacteria, mammals, plants, insects, etc. as compared to a hectare of temperate forest, or a hectare of any other ecosystem on Earth.
For the past three years I was one of the instructors of a field course, Tropical Cloud Forest Ecology, given by the University of Wyoming, USA.  The course took place at Yanayacu Biological Station & Center for Creative Studies, near Cosanga in the north-eastern Andes of Ecuador (elevation ~ 2100 m).  (You can read more about the course on Jennifer Donovan-Stump's website).  The photographs were taken over a ten-day period in May or June of each of three consecutive years (2010, '11, '12).  Photographing insects was not part of my job, so I did it when I had a spare moment, which was not often.  The slide show depicts about 50 species in the insect order Lepidoptera, commonly called moths.  Numerous lepidopteran families are represented, including Arctiidae, Saturniidae, Geometridae, Nymphalidae, and others.  The photographs are just a glimpse of the incredible diversity that occurs in a relatively small patch of Andean cloud forest.
Most of the images were taken at a light trap.  Each night we set up a standard light trap for collecting insects (a white sheet with lights in front of it, which you can see in two of the images).  Many types of nocturnal insects, especially moths, eventually make their way to artificial lights at night.  It is hypothesized that they intend to navigate by moonlight, but cannot distinguish between the moon and our electric lights.  When they attempt to navigate using our nearby artificial lights they end up spiraling inward toward the source, thus appearing to be "attracted" to the light.  In reality, our artificial lights confuse them, and interrupt their ability to navigate the night sky.  Once they arrive at the light, they are again confused or "tricked" into daytime behavior, and the white sheet provides a convenient place for them to roost.  For humans, it facilitates observation and collection.  Most mornings and some nights I quickly snapped some pics of the many animals on or near the sheet.  I present only the best of my images here; there were many more species that I was not able to photograph well due to wind, humidity, the insect's position on the sheet, etc.  And I simply didn't have time to photograph the hundreds of species on the sheet each day.
Also included are several images of butterflies from the forest. (Butterflies are moths, just fancy, day-flying moths with clubbed antennae). In two images a butterfly was taking nutrients from a dead toad (look for the proboscis - the butterflies' mouthpart that is a sucking tube for obtaining liquid food - touching the carcass of the toad).  Finally, I include a few nice shots of caterpillars, the immature forms of moths.  In two of the caterpillar images you will notice white cocoons stuck to the outside of the larvae.  These cocoons contained pupating parasitoid wasps in the family Braconidae, subfamily Microgastrinae (that fed internally as larvae, then chewed their way out of the caterpillar's body prior to spinning their cocoons).  The caterpillars were still alive and could move around, but were slowly dying.  They remained alive until the wasps completed their development and emerged from their cocoons, then promptly died.
Take a moment from your busy day and gaze upon these wondrous creatures of an Andean cloud forest.  A picture says a thousand words.  Looking at a simple visual representation of a small part of the lepidopteran fauna of Yanayacu gives an appreciation of Earth’s greatest treasure -- Biodiversity.
​

What is Biodiversity Gardening?